World Most influential Musicians Of the 20th And 21st Centuries | Talkgeria.com

The 20th and 21st century is filled with some of the great musicians and music groups ever to grace this earth. These musicians brought cool music to our ears; they influenced us in diverse way, which is why we don’t cease to forget their names and immense contributions to not just music but to humanity as well.

Even after death, some of these great musicians are still celebrated by individuals and fans all over the world. Musicians such as Michael Jackson, who died in the year 2009, are always celebrated to date.

Below is a list of these artists including the huge influence they had on music and humanity in general. 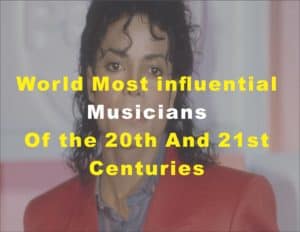 Regarded as the favorite son of Jamaica and one of the most influential people in music, the spiritual master of the decades passed, including the times to come, Bob Marley, was a beacon of hope, peace, and unity in a world full of conflict and strife.

His fantastic music, timeless in the melody it produces, incorporates souls of several ages searching for a common path to a greater conscience, the type that his song offers.

Bob Marley’s music touched the world in ways unimaginable. His soulful lyrics were very effective that even to date his song remains a favorite for generations alike. Bob was included in this list because of the huge influence he had on the music genre known as Reggae. Bob Marley made Reggae music very popular, and with it, he affected the world, and other artists drew inspiration from the flow of his music.

Bob Marley is worthy of this list because of the fame he brought to reggae music, This genre of music incorporates the use of drums, bass, piano, horns, and guitars to produce a euphonious melody characterized by an active baseline, one-drop rhythm, with accents on the third beat of each bar, and basic simultaneous chord structure, At 135,46 million equivalent album sales, Bob is regarded as the most successful Caribbean act of all-time.

Considered as the Artist of the Millennium, Michael Jackson greatly influenced the world with his high-pitched shrieks, twirls, moonwalks, crotch-grabs, and impactful songs that changed music forever. The impact he left on the music industry alone is enough to make him a legend.

Michael Jackson is worthy of this list not only because he is regarded as the most influential Artist of the 20th century, or because he is the king of pop, but because of the influence his music and style has on modern artists such as Justin Bieber, Kanye West, Usher, Bruno Mars, Justin Timberlake, etc.

Michael Jackson was a worldwide figure, adored by all. His music traveled near and far, and he performed in several countries across the globe. Michael Jackson is considered one of the most successful musicians in the history of music, and this fact can be back with the massive sales of his album “Thriller,” amongst others enjoyed. Before his demise in the year 2009, Michael Jackson had plans to delve into classical music.

Michael Jackson was a humanitarian who financially supported organizations such as the United Nations, UNICEF, etc. The contributions Michael Jackson made towards music are one that would continue to be talked about now and several years to come.

Tupac Shakur, also regarded as 2Pac and Makaveli, is known as one of the most iconic and influential rappers of all time. What Tupac brought to hip hop was a level of rawness and poetic drive in the manner in which he expressed his words.

Tupac boasted of a certain level of self-empowerment that made people want to hear what he had to say. More than twenty years after his unfortunate death, Tupac has become a celebrated worldwide figure. Tupac isn’t just a lodestar of hip-hop; he is a worldwide cultural phenomenon as well.

Tupac did not only experience massive success in the sales of these records (of which he sold over 75million records worldwide), he was also an actor, an entertainer, an activist, and a strong leader. With the aid of his music, including other prominent skills, Tupac addressed social problems that stopped individuals of color from achieving greatness.

Tupac Shakur was included in this list because of his immense contribution to hip-hop. He transformed hip-hop into what it is today and served as a role model to many artists, one of which is Kendrick Lamar. Several musicians also stated that Tupac was the reason why they decided to move into hip-hop.

Read Also: How To Edit Youtube Videos On Laptop and iPhone (Step-by-Step)

When speaking of musical forces, only a few can be compared to the unrelenting and influential prowess Beyoncé possesses. Beyoncé music career is crammed with record-breaking feats; she owns the record for the most nominated woman in the history of Grammy.

She has taken home the most MTV Video Music Awards in history. She is always regarded as one of the most influential female artists of our generation whose influence has changed the shape of pop music.

As a soloist, Beyoncé is a huge influence to not just pop music, but to women and humanity in general. Her songs are a source of hope to various disheartened women out there. With songs such as independent women, single ladies, and Girls run the world, she assures females that they don’t require a man to be successful.

Beyoncé has sold over 118 million solo albums, including 60 million with Destiny’s child, thus, making her one of the highest-selling artists of all time,

Beyoncé was included in this list because of the success she has achieved even as a woman. You can’t mention R&B pop without regarding Beyoncé; neither can you mention top female musicians of the 20th to 21st century without regarding her. Beyoncé also supports several charities,

Hillsong – You Are Life (Audio & Lyrics)

Ayanda Ntanzi – HE IS ALIVE

Ayanda Ntanzi – I AM SAFE